I received the following in an email from my best friend “Spoon”. Her comments are followed excerpts of the orignal article which appeared in The Charlotte Observer Father’s Day.

Could you imagine 6 days w/o food and 18 months in a refugee camp eating rice and soy sauce just so that your children can have a better life???? This reality brings home how spoiled we Americans are, with our 2 and 3 televisions, closets full of cloths, pantries and fridge’s full of food, thrown away left-over’s, evenings and weekends at play or in front of the television while the youth of America make pregnancy pacts, sell drugs, commit murders, and run wild in the streets. Talk about sacrifice! These things (people starving in camps searching for a better life) go on today all over the world. Parent’s in other countries risk their lives to provide for their families the things we effortlessly have at our disposal. Something is VERY wrong with that. 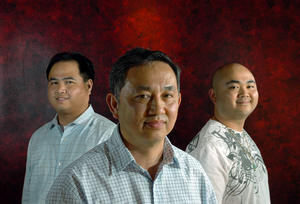 Instead of eating Sunday dinner at their parents’ house as usual, today Hau and Luan Doan are cooking.

Hau will fry chicken wings and Luan will fry crab cakes in honor of their father, Dung Doan, who sneaked his family out of Vietnam at night in 1978 on a boat he built to flee the communists.

The story of the escape is one Hau (pronounced How) and Luan (Loon) heard many times growing up in America. Six days and six nights without food or water, their father, mother and 2-year-old Hau, grandparents and friends, lying exhausted and dehydrated on the bottom of the boat, then jumping to safety when they drifted close to Malaysia, where they lived in a refugee camp for 18 months before immigrating to America.

Not until his mother told him two years ago did Hau understand the significance of his red tricycle. He was 4 when his family arrived in the United States in 1980 and settled in Virginia Beach. Hau saw other boys riding red tricycles and he wanted one. And so around their third day there, his father, who had been studying to be a lawyer in Vietnam, cleaned up sea shells scattered in front of a building near the beach. He earned $20 and he used that $20, the first money he made in America, to buy his son a red tricycle.

We as Americans can be very intolerant of immigrants regardless from whence they came. We despise the cultural differences and their refusal to assimilate to “our” ways simply because we do not understand. Our arrogance allows us to judge them harshly blinding us to the simple truth…most immigrants want the same thing we want: an opportunity to live free from political or religious oppression and to raise their families in a safe environment.

I include myself in that group of people whom I chastise because I have had my moments of ranting and venting about a particular group of immigrants in my area. The next time I get my dander up I would do myself a great service to remember the Doan’s story. Maybe we all should too.

3 thoughts on “A Father’s Love”