If you want to accept this feaux apology, go right ahead. I can’t tell you what to do. However, I will not fall for the banana in the tailpipe (pun intended) and let me tell you why.

If you’re a person of color, specifically a BLACK person, I want you to recall the racial slurs thrown at you by white people whose sole intent it was to belittle you. Recall all the epithets hurled on the internet and telling BLACK Americans to go back to Africa. Recall the numerous times black people have been called monkeys, gorillas, or apes. Recall in history how during both WWI and WWII BLACK soldiers were thought to have tails (monkeys have tails). 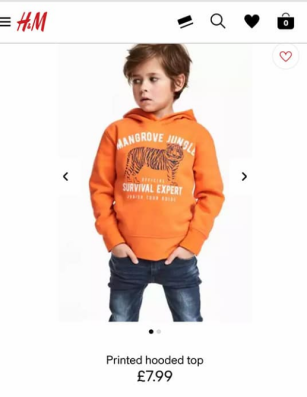 We know these references aren’t new. History proves that. No one can feign ignorance to how offensive this is. And especially no white person can claim ignorance because it is ingrained in the racist lexicon and playbook.

Now also consider how this looks juxtaposed with the photo of the white child in the same campaign.

This didn’t somehow mysteriously manage to slip through the several layers of decision makers at H&M. This was deliberate. This was intentional. This was willful. This was purposeful.

The intent to be offensive, garner attention (negative or not), issue a weak ass apology, sales rebound within 30-90 days all at the expense of the expendible.

So in short, fuck H&M now and forever more.